Reaching lives for change and hope

On this page you can find out about the proposals to re-order our buildings in order to better serve our Parish community, and make St Andrews more welcoming so that we can invite more people into our Church.

We will post updates here as they become available, so please check back here frequently and click on the links below to view the documents.

Letter received from Ms Elizabeth Harley (The Beatrice Laing Trust) enclosing a cheque in the sum of £2,000 covering the pledge originally made by them.
Letter sent to Ms Harley expressing our appreciation for the generosity of the Trust.

Somerset West and Taunton Council confirmed payment of the £5,000 pledged by the Council when the building work began.

Letter sent to Marcus Prowse expressing our appreciation for their generosity to the project.

As promised George Bros Builders arrived at the church at 8.00 am to commence work on the building of the toilet extension.
The work is progressing well.

Pre-Contract Meeting with Jo Hibbert (architect) during which Owen Beale (Director George Bros Builders) confirmed that the work is planned to begin on Monday 1st March 2021.

During a meeting of the PCC it was unanimously agreed to accept the Tender from George Bros Builders, Taunton in the sum of £62,561.40 inclusive VAT.

Due to the Covid-19 Pandemic work on the project continued with email contact to the architect and to Somerset West and Taunton Council and The Beatrice Laing Trust who had generously pledged money to support the project. During this time our finances continued to grow through donations, bequests and regular monthly giving to the project.

We have now reached the magnificent sum of £34,000 through the generosity of fund raising, monthly giving and the Buy & Build Scheme.

We have two pledges totalling £7,000 which will be released when we reach £40K.

There are a number of building products which are still available for purchase ranging from £25 to £50 each.

On behalf of the team Thank You for your on-going generosity to the project.

We are delighted that the Trustees of the Garfield Weston Foundation have made a grant of £5,000 towards the cost of the toilet extension.

We thank the Trust for this very generous grant.

A Cream Tea was held on Saturday 10 August where £647.80 was raised in aid of the New St Andrew's Project.

We are delighted that the Trustees of the Beatrice Laing Trust are prepared to make a grant of £2,000 towards the cost of the toilet extension.

We thank the Trust for this very generous donation.

We are close to the half way point where we can apply for the Faculty from the Diocesan Advisory Committee.

We are grateful to Richard Bryant from TDBC who has confirmed that £5,000 has been earmarked towards our building project.

Our thanks also to councillor Marcia Hill and the other councillors who supported and agreed that our Bid should be accepted.

16th January 2018 – Meeting arranged with our architect
Jo Hibbert for presenting us with proposals for the development of the Narthex area.

13th March 2018 - Meeting with our architect Jo Hibbert who brought final drawings for the toilet extension. Drawings have been submitted to Taunton Deane Borough Council for approval. Following this, they will be submitted to the DAC for their approval also.

3rd April 2018 - Installation of two handrails to the main entrance of the church is shortly to take place, and these will be blessed as part of the Parish Eucharist on Sunday April 22nd. Also on Sunday April 22nd we will be launching a funding appeal towards the cost of the building works. 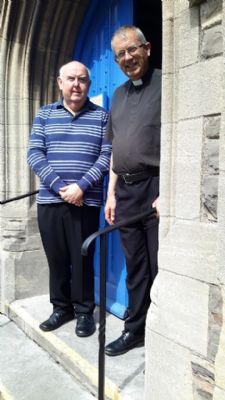 On Sunday 22nd April we dedicated the new handrails on the doors into church. We hope this will make the church more accessible to more people.

Many thanks to Ben Horrobin who installed them for us and to all who have contributed to the fundraising.

New St Andrews received a very generous donation of £1,150 from the All Churches Trust towards this project.

Agreed to appoint Oakleaf Builders to do the work subject to approval by the DAC.

A local history evening - A Travelling Church - Still Moving by well known local historian Dr Robert Dunning held on Tuesday 13 November 2018 in the Church raised £557 in aid of the New St Andrew's Development Fund.  Thank you to Bob and all those who supported this very interesting and enjoyable evening.

Revised tender with prices due in January 2019.

Fundraising to continue with further Bids to be applied for.

August 2017 - For new handrails -  Faculty from the Diocese and planning permission from Taunton Deane Borough Council applied for.
Application notice displayed on church door from 10/8/17 - 31/8/17 inclusive

20th September 2017 -  TDBC has APPROVED the planning application for the new handrails.  The documentation is on their website today.  We should be on course for our faculty to be discussed at the DAC meeting on 11th October.

12th December 2017 – Faculty granted authorising the supply and fixing of two handrails to main entrance of the church.

12th December 2017 – Official order given to Ben Horrobin to produce and install the handrails.